After figuring out how much yarn/ thread you need it is time to get the warp threads on your loom.

In general, warping for double width is the same as for a single layer of fabric. The directions below are for direct warping (when you tie on to the back apron bar and pull the warp threads through the rigid heddle and onto a warping peg).

But there are a few differences to keep in mind. 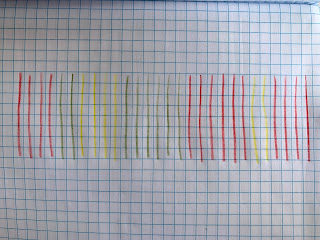 Now below is a picture of how it will look if you were weaving it as a double width warp. (Well sort of 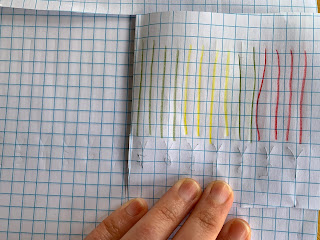 In general, before you begin warping your loom you need to fold your pattern in half and make sure you warp the outside of your warp on the right and the middle on the right. If in doubt, write down all of your warp threads using a color code such as P for purple, K for pink and so on. Then, starting with the outermost threads write a 1 next to the first pair, the next pair on each side get a 2 and so on until you reach the middle of your fabric. This is your warping order starting from the right side of the loom and working towards the left. See picture below for an example. 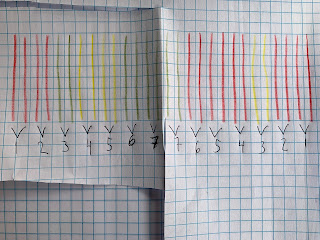 Note: Each slot in your heddle (for the width you are weaving) should have 4 warp threads total.

The video below goes over how to figure out what thread to pull through which slot on your heddle with several examples.

Now, because there are two layers, chances are that your warp threads have several crosses behind the heddle. You can fix this by placing a warp separator or length of string behind your heddle. Run it across your warp threads so that the threads below are those that are the bottom layer (the right side) of your project and the threads on top of your separator are the threads of the top layer (the left side) of your project. Below, I am pulling up all the pink threads to prepare for a project where the left side has all pink warp threads and the right side has all purple. 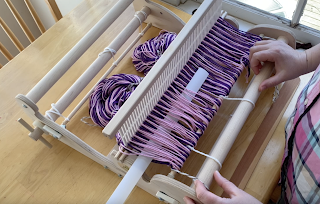 Once you have separated the warp threads into the two layers, take your warp separator and push it all the way back against the back beam (this will push any crossed threads against the back apron bar and out of your way while you weave.)

Another good practice when working with a double width warp is to keep those two layers separate. So, before winding on, put another warp separator (either a vinyl slat, a length of string, a cardboard or paper strip or whatever else you have handy that will stretch across the length of the warp with a little extra on each side). Now, as you wind on, keep pushing this separator forward against the rigid heddle.

Once you have wound on, take those top layer warp threads and flip them over the top of the rigid heddle to get them out of your way.

Step 3: Preparing The Bottom Layer (right side of final project)

Just looking at the bottom layer, take the warp thread that is the farthest to the left in each slot and pull it through the eye hole to the left. Do this all the way across your warp. 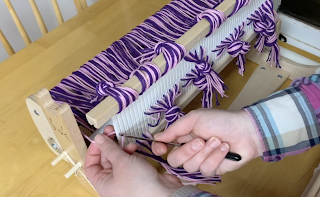 Now it is time to attach your warp to your front apron rod, as you normally do. Just keep in mind not to make your bundles too thick. Also, do not remove the warp separator you place behind your heddle. You want to keep that in place for at least a little longer.

Step 4: Preparing The Top Layer (left side of final project)

Then, place the right most thread in each slot onto a second string heddle rod (Rod B).

And with that we are ready to weave! The video below go over how to prepare the warp for weaving.