"The time has come," the Walrus said, "To talk of many things...

"Of shoes, and ships and ceiling wax, and cabbages and kings. Of why the sea is boiling hot and whether pigs have wings."

For some reason, I always think of Alice in Wonderland whenever I sit down at my loom, shuttles in hand, and prepare to finally start weaving.

Below is a video showing how I weave double width, with a single rigid heddle and two string heddle rods.

Let's go over each of the four sheds we'll need to make to weave double in more detail.

- To create the first shed, we need to get the top layer out of the way. So lift both string heddle rods. Then, lift the rigid heddle and place it in the up position. This leaves the bottom layer slot threads relatively down compared to the threads of the top layer and the threads in the holes of the heddle. Pass your shuttle from right to the left. 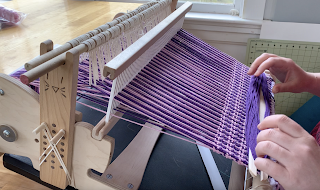 Shed Two: Top layer left to right
- For the second shed we need to lift Rod A (this is the string heddle rod with the leftmost pics from the top layer). Keep all other layers in neutral. You will notice in the picture below that I have a stick shuttle in use. That is because the cotton thread I used in this project was super sticky and I used the shuttle to help separate the layers and get a cleaner shed. 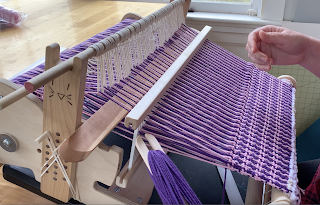 - Pass your weft thread from left to right
- There is one important thing to keep in mind when weaving double width, and that is whenever you pass your weft thread from left to right (as you do in shaft 2 and 4) you need to make sure to not pull the weft snug against the leftmost thread. If you do pull snug, you'll end up with a permanent crease in your final project, right down the middle of the fabric.
So let's avoid that by doing the following: Look for the left most thread (in should be in a hole on the heddle).  Give it some extra tension by pulling it to the left as you angle your weft thread and prepare to beat. In the picture below, you can see my technique where I pinch the left most thread with my pointer finger and thumb, and place my middle finger between the thread I am pinching and the rest of the warp threads. 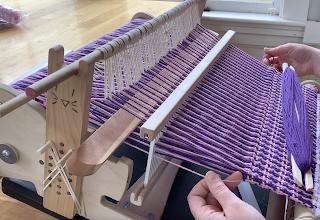 Shed Three: Top layer right to left
- This shed is the easiest. Simply lift Rod B and pass your weft thread from right to left. Since we are going from right to left we don't need to worry over much about the edge (just control the edges as you normally would when weaving.) 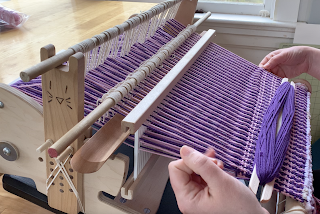 Shed Four: Bottom layer left to right
- Another layer going left to right... You now know what that means! We have to pay extra special attention to that left most thread. To start, place the rigid heddle in the down position. This brings the threads in the heddle's holes down and leaves all the other threads up. 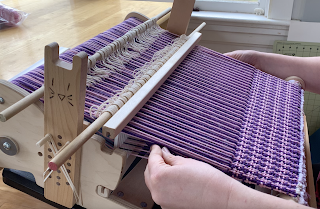 - Now, when you pass your weft thread from left to right, pinch the loop that is created against that leftmost thread (again it should be a thread that runs through a hole in the heddle.) If it looks a tiny bit sleazy you are doing it right! Below is a picture showing my technique. Note how I pinch the loop against the leftmost warp thread as I angle the weft and prepare to beat. 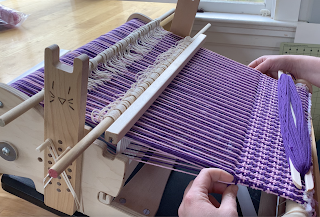 Now, that's it! Repeat until your project has reached your desired length.
Here is a picture of my project fresh off the loom. Note how the fabric looks a bit sleazy and that you can see a crease in the middle. That sleazy look is in part because I worked hard at keeping the middle of the project (what was on the left side of the loom) loose. 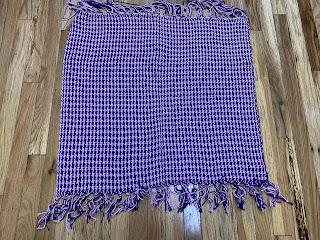 In this next picture, taken after wet finishing, you can see that everything has tightened up nicely and the fabric is no longer sleazy. And! There is no middle crease anymore. If you have good eyes you may spot the several unintentional "beauty marks" of warp floats. They happened as I neared the end of my project and the top layer became extra hard to separate. By the time I noticed them I was too ready to be done to go back and fix them. My children, as seen in a picture below, don't seem to mind. 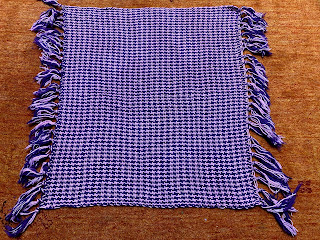 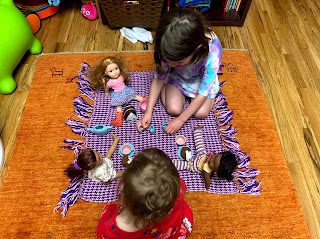 Below are links to additional videos where I show weaving double width. In these videos I am using a thread that is no where near as sticky and hard to work with as the cotton thread I used in this tutorial. I am also using an older version of the Tabby Jack.